On Tuesday, May 19, hundreds of people lined up in front of the Webster Hall concert venue in Manhattan’s East Village, and most of them were speaking Russian. Expats, first generation immigrants and tourists, they all came to catch Boris Grebenshchikov on a rare American tour. He’s the man who essentially invented rock music in Russia, and has been one of the most respected and influential singer-songwriters in the country for several decades.

Grebenshchikov, 61, who started making music in the early 1970’s with his band Aquarium, is often described as the Russian counterpart to Bob Dylan. Though this label greatly oversimplifies both musicians’ legacies, certain aspects of the comparison make sense. A fan both of British and American rock (from Dylan to Marc Bolan, Lou Reed to Talking Heads) and the Russian literary tradition, Grebenshchikov – usually referred to as BG – synthesized contemporary Western culture with his native Russian one, interpreting the foreign sounds in his own way and creating a unique sub-genre with his brand of highly sophisticated and metaphoric lyricism. Essentially, since the mid-1980’s BG has assumed the role of the Russian Poet, an artist who put the nation’s spirit into song. Many of his lines have become their own kinds of proverbs in Russian, and hardly anyone who tries to write a song with a guitar there can escape his influence.

He is one of the greatest composers of the 20th century, whose stirring symphonies and dark and tormented quartets have echoed around the world’s stages and concert halls for over 50 years.

Yet Dmitry Shostakovich had a complex and troubled relationship with the Soviet regime under which he lived most of his life. Despite writing many pieces praising the greatness of Stalin and the Soviet system, it is widely acknowledged the compositions were simply a means to ensure his survival at a time when non-compliance meant a prison sentence or worse.

Since the end of the cold war, most performances of his pro-Soviet compositions and cantatas use modified version of his texts, removing the Stalinist references out of a sensitivity to the brutality of the past and the millions who died.

But now, a world-renowned conductor, who escaped communist Estonia as a child, has embarked on a highly controversial project to perform them as Shostakovich originally wrote them.

Paavo Järvi’s recording of two pro-Soviet cantatas – The Sun Shines Over Our Motherland and The Songs of the Forests, both written in the 1940s in overt praise of Stalin – are released this week ahead of the conductor’s appearance with the Berlin Philharmonic at the weekend.

Ukraine, which has been dragged into a partial deadly civil war after Russian-backed separatist rebels started battling for independence in the east and Crimea was annexed by Moscow is erasing traces of the communist era

A hulking steel statue of a victorious female warrior bearing aloft sword and shield looms in dour majesty over the Ukrainian capital. The Motherland Monument’s shield bears the Communist hammer-and-sickle, but maybe not for much longer. Ukraine’s leaders are eager to be seen as reinventing the nation. And erasing all visible reminders of the communist past, they say, is an important step toward that goal. “Elimination of communism has to happen in people’s heads and consciousness,” said Kiev deputy mayor Oleksiy Reznikov. “Symbolism irritates some people and creates a certain aura that we need to get rid of.” Parliament opened the way last month by backing a package of laws that included a loosely formulated ban on communist, as well as Nazi, imagery and ideology. The provisions, which still require approval from President Petro Poroshenko, will make it illegal to show symbols from the Soviet era, such as the logo of Communist Party, or play Soviet-era anthems. It will also become an offense to deny the criminal nature of the Soviet regime. Taking down all the communist symbols will take time, money and a fair dose of acrobatics, especially in the case of objects like the 100-meter (330-foot) tall Motherland Monument. “We will find alpinist patriots, like the famous ones who painted a star at the top of a Moscow hotel the blue-and-yellow (of the Ukrainian flag),” Reznikov said. “We will ask for help from brave guys like that to get this work done.” Eager Ukrainian nationalists have for the past year been racing ahead of the authorities by pulling down dozens of statues of Vladimir Lenin, the Bolshevik revolutionary and founder of the Soviet Union. The sight has typically been greeted with a mixture of glee, indifference or, among mostly older people, dismay. The thrust of what has been dubbed de-communization has sharply divided views. Supporters argue it has been long in the waiting and will set the stage for Ukraine to leave its history behind. “I would have got rid of it all years ago. It simply doesn’t reflect the mood of the Ukrainian people,” said Kiev resident Vasiliy Babkov. “We have to build up that which is truly in the blood of Ukrainians.”

Russian revolutionary known as ‘primeval force of the black Earth’ by contemporaries was close associate of Lenin and his wife, and played important role while in exile.

A London-based academic has uncovered a photograph of the woman described by some as Vladimir Lenin’s true love and the “primeval force of the black earth” by her contemporaries, after the image was lost for nearly a century.

Dr Robert Henderson, a Russian history expert at Queen Mary University London, uncovered a photograph of Apollinariya Yakubova – a Russian revolutionary who fled to King’s Cross in London at the turn of the 20th century.

Yakubova and her husband were close associates with Lenin and his wife Nadezhda Krupskaya, who lived intermittently in London between 1902 and 1911, although Yakubova and Lenin were known to have a tempestuous and fractious relationship over the policies of the Russian Social Democratic Labour party.

As first reported by the Camden New Journal, Henderson uncovered the photograph in the bowels of the State Archive of the Russian Federation in Moscow in April while researching the life of another young revolutionary, Vladimir Burtsev, for a book.

n the shadow of one of Stalin’s Seven Sisters skyscrapers in Moscow’s Presnensky District, an unkempt park gives way to a trio of yellowing buildings in varying states of decay. The crumbling concrete and overgrown wall-garden don’t give much away, but this is the product of the utopian dreams of a young Soviet state – a six-storey blueprint for communal living, known as the Narkomfin building.

Designed by architects Moisei Ginzburg and Ignaty Milinis in 1928, the building represents an important chapter in Moscow’s development – as both a physical city and an ideological state. Built to house the employees of the Narodnyo Kommissariat Finansov (Commissariat of Finance), Narkomfin was a laboratory for social and architectural experimentation to transform the byt (everyday life) of the ideal socialist citizen.

In the years following the 1917 Russian revolution, living conditions in the newly established Soviet Union left much to be desired. Newcomers moving from the countryside with the promise of a new life arrived in an overcrowded and underdeveloped Moscow with very little infrastructure or housing. Architects were tasked with developing a solution for the housing shortage – and a framework to support the changing face of Russian society.

[From the Blog Noisey] 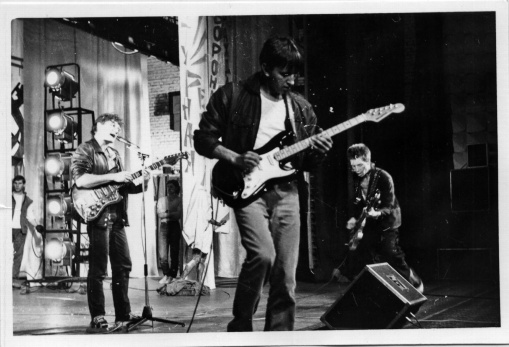 For a kid who grew up listening to the Belorussian disco-pop band Verasy and saccharine hits like, “I Live with Grandma,” Soviet punk arrived as both a provocation and a call-to-arms. It was, to paraphrase former Samizdat journalist Alexander Kushnir, like finding a knife in your pocket, or discovering a death-cult next door. One minute you’re a straight-backed Young Pioneer, spooning down whatever music Melodia (the USSR’s sole, government-run record label) deemed toothless enough for mass-consumption—Italian love songs, life-affirming Soviet ballads, the preternaturally unhateable ABBA and aforementioned bad disco—the next you are head-banging to ditties like “Old Age — No Joy,” “Corpse Smell,” and “Hey Broad, Throw Up.” Years before Gorbachev took the podium at the 1986 Congress of the Communist Party and uttered the word “glasnost,” musical Perestroika had already begun.

The idea that remote concrete cities born of Gulag labor, more than a thousand miles east of Russia’s cultural capitals, served as the Soviet punk scene’s Lower East Side may sound bizarre to Western ears, but it was actually Siberian bands like Civil Defense, Survival Instruction, and BOMZh who produced the raw and unapologetically polemical music that came to define the last generation of Soviet youth, a generation for whom change couldn’t come fast enough. 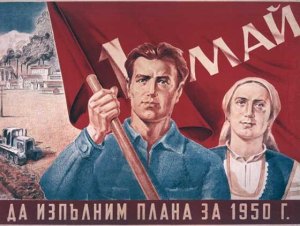 [From the Calvert Journal]

Soviet sponsorship for sonic research led to the invention of the first electronic instrument, the theremin, in 1920. In St Petersburg, the Floating Sound Gallery, Russia’s first sound-art platform, picks up where these avant-garde experiments left off.

A small space in the New Stage building of St Petersburg’s Alexandrinsky Theatre. Inside, the silhouettes of people seated in a circle of chairs are discernible through the darkness, as are the sounds of — no, not music, but a density of rasps and whistles, the experience so alien that it’s difficult to classify the event as a concert.

Some audience members close their eyes, engrossed in the sound; after 20 minutes of silent incomprehension, others gloomily get to their feet and leave, followed by those who aren’t quite as brave or decisive. An hour in and there’s only a handful of people left, who are brought back to reality by the gradual ebbing away of the sounds.

The light from two monitors standing in the corner illuminates the faces of two men. One of them, Anton Iakhontov (aka Patrick K.-H), ranks among Russia’s most successful sound and media artists. His colleague is Oleg Markov, a renowned composer, musician, sound artist, and editor of various contemporary music magazines. Together, they curate St Petersburg’s New Stage’s Floating Sound Gallery — Russia’s first sound-art platform.