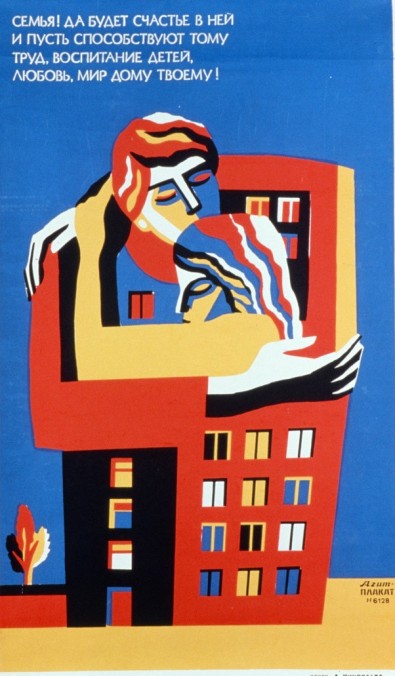 Even in the final years of the Soviet Union, the day-to-day life of an average person in the communist state remained a mystery to curious Americans. In 1989, a poster show helped fill in the gaps.

In the mid-1980s, Mikhail Gorbachev became the first Soviet leader to acknowledge the country’s economic limitations and poor living standards, ushering in economic reforms (“perestroika”) and government openness (“glasnost”). A new era of relative transparency meant acknowledging the ills of urban life, including housing shortages, pollution, and low birthrates. The Soviet government, as it always did, used posters to share their new message. But this time, the posters also made their way into the United States.

Poster Art of the Soviet Union: A Window Into Soviet Life, was assembled by the San Diego chapter of the American Institute of Graphic Arts (AIGA) in 1989. After closing in 1990, the show made its way to AIGA chapters around the country from Seattle to Atlanta.

It was put together by Ron Miriello, a founding board member of AIGA San Diego. Through a former professor of his, Miriello was able to coordinate with Oleg Savostiuk, the secretary general of the Union of Soviet Artists at the time. Savostiuk secured authorization to have the posters exhibited, curated the show, and personally appeared at its opening.

“There was a giddy excitement about the West getting to know Russia as a friend rather than a foe,” says Miriello. “Today, in the era of Putin, we might look back on this time as a lost opportunity.”

[The poster reads: “Family! Let there be happiness in it, and let work, the raising of children, love, and peace in your home contribute to it!” The poster acknowledges not only a housing shortage across the USSR’s cities but that urban industrial life is an obstacle toward creating a nurturing home environment. Under Perestroika, the government gave constitutional protections to families for the first time, improved maternity benefits, and increased subsidies for low-income families. (Leshunova, date unknown)]