After 5 years of absence, Pawel Pawlikowski returns to the big screens with the beautiful ‘Cold War’. The film takes place in post-WW2 Poland under the Soviet regime and is loosely inspired by the relationship between the director’s parents. The two, according to Pawlowski, is “the most interesting dramatic characters I’ve ever come across … both strong, wonderful people, but as a couple a never-ending disaster”. An ambitious pianist and composer Wiktor (Tomasz Kot) and Irena (Agata Kulesza) are putting together a big band ensemble ‘Mazurek’ out of talented young people from the rural areas. They are gathering them to perform traditional Polish folk songs and dances. One of the candidates, mysterious Zula (Joanna Kulig) catches Wiktor’s eye. Zula is ambitious, cunning, and beautiful which makes it easy for her to get what she wants from life. The central characters engage in a passionate life-long romance with various ups and downs, break-ups and come-backs, journeys and returns.

Although the plot might sound like a cliché the film is a true masterpiece. The story is told with earnest attention to details, with subtle moments and gestures, scenes full of emotions and passion. Although the film is centred around the relationship of Wiktor and Zula, the overall theme is freedom in divided Europe. After the war Poland  was devastated by the Nazi and Soviet armies which used the land as their battlefield. The authoritarian government tries to gain favour in the rural areas by investing in folk culture and lifestyle. In return, Wiktor has to promote the Soviet government although this clashes with his artistic vision. Zula has no freedom to be with whoever she wants as she has escaped prison by being a minister’s favourite. When a chance comes Wiktor plans an escape beyond the iron wall but Zula hesitates. The life of a foreigner has also its limitations. The two have to fit into the expectations of the elite and live with a feeling of being constantly at someone’s mercy. They both struggle to be happy as their expectations clash with the harsh reality.

[From, The Calvert Journal]

A series of Russian and Soviet films celebrating the defiant, electric and subversive in are set to show in London as part of a special event celebrating classic cult cinema.

Accompanied by a programme of talks and discussions, each movie pieces together the effects of Russia’s profound 20th century upheaval on screen.

“This season explores the shifting forms of self-expression, independence and defiance through Russia’s seismic cycles of reinvention,” organisers say. 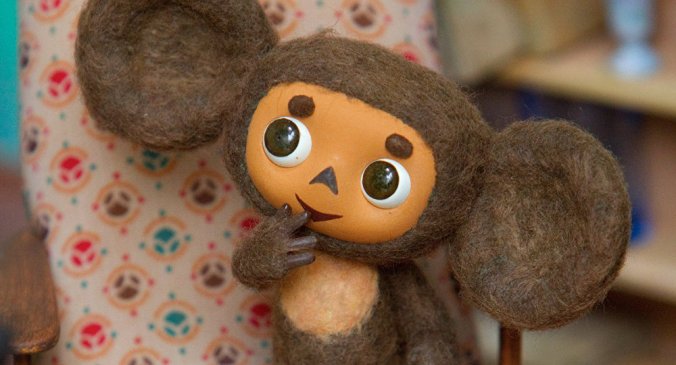 In America, the beloved cartoon character Mickey Mouse has had nearly a century of shows, books, films, amusement parks—and now an upcoming exhibition—to make a lasting impression across generations of children. But in the U.S.S.R., the national treasure Cheburashka, a small, brown, furry creature of unknown origin, was only featured in one book and four short films—a total of 70 minutes over 14 years.

Despite his small footprint, Cheburashka, who was created in 1965 by the recently departed cartoonist Eduard Uspensky, survived the collapse of the Soviet Union and continued to be a beloved icon in Russia—and, over the decades, he became an international icon, as well. The character has starred in far-flung spinoffs and a major motion picture, been present at political protests, and even had a rocket launcher named after him.

The Moscow-based techno-punk outfit Interchain (comprised of Andrew Lee and Jenya Gorbunov, pictured above) already has an impressive discography. But their most recent release, Plenum—which just came out on the Hivern Discs sublabel HVNX this past March—is a particularly fiery addition to their original take on frenetic, punk rock-indebted electronic sounds. They sat down with us to shed some insight onto their wide range of influences from the Soviet era’s industrial music scene. Listen to their eight selections—from the ’20s to the ’90s—below.

An exhibition space in Frankfurt will introduce photography enthusiasts in Germany to the life and work of celebrated Soviet-era creative Guram Tikanadze, who became the first Georgian photographer known to the world across the Iron Curtain.

The Ausstellungshalle venue in the central German city will open for a personal display of the artist and mountaineer who died descending the famed Shkhara peak in 1963.

Remembered as a major figure in the development of the photographic scene in Georgia, Tikanadze also received accolades abroad.

His bronze medal at the 1959 World Festival of Students and Youth in Vienna was particularly notable for the period when reaching the international audience was a difficult proposition for Soviet creatives.

Born in 1932, Tikanadze studied at the faculty of Geography and Geology of the Tbilisi State University.

Catching an interest of photography early on, he took classes for the art form at the capital city’s Young Pioneers Palace (now Georgian National Youth Palace).

Featuring in Soviet Georgian and USSR-wide displays, Tikanadze’s work was also seen by audiences in international exhibitions from Japan to the United States to Europe.

In the early 1920s, in an effort to bring better treatment facilities to everyday workers, the former USSR began building state-run sanatoriums and spas across the region, particularly around the Crimean Peninsula. Some of the most innovative buildings of their time, the often decadent institutions were designed for mandatory vacations, and housed thermal baths and relaxation areas as well as facilities for medical treatment. Today, many of these once-bustling buildings lie forgotten, abandoned by time and politics. As an intriguing symbol of the ex-Soviet Union, one photographer decided to travel to sanatoriums along the Russian Riviera to document them in striking detail.

Belgian photographer Reginald Van de Velde first became interested in sanatoriums around Georgia in 2012. Having read about the history of the buildings, he decided to plan a trip there to document them, travelling to places such as the spa resort of Tskaltubo, as well as the notoriously hard to reach Abkhazia. Located along the Black Sea coast, the latter was once the jewel of the ‘Soviet Riviera’, but today the de facto independent republic is still recovering from the 1992 – 1993 war. Travelling to Abkhazia by way of Georgia, Reginald and his partner had to pass through several tense borders and checkpoints in order to gain access.